Thai soldiers gather after arriving outside the building of the National Broadcasting Services of Thailand in Bangkok on May 20, 2014
Apichart Weerawong—AP
By Maya Rhodan

Thailand’s army declared martial law on Tuesday, in an effort to “keep peace and order” a day after the Southeast Asian nation’s acting Prime Minister refused to resign amid mounting protests.

Niwattumrong Boonsongpaisan insisted he “can carry out duties and has full authority” as Prime Minister, the Associated Press reports. He added that the cabinet could not resign either because “it will be negligence of duty and against the constitution.” Former Prime Minister Yingluck Shinawatra and nine cabinet members were removed from office in April on charges of nepotism and abuse of power, but protesters claim the ouster was politically motivated.

Under Thai law, a new government must typically be elected, but protesters have vowed to block elections unless major political reform takes place. Until then, they are calling for an interim Prime Minister and cabinet to be appointed. A group of 70 Senators has proposed a new government that would enact reforms, but has little recourse unless the current leadership resigns.

A military-run television station aired an announcement on Tuesday that said, “The public do not need to panic but can still live their lives as normal,” BBC reports.

The protests, which have lasted six months, have led to 28 deaths and hundreds of injuries. Since 1932, the country’s army has staged 11 coups. 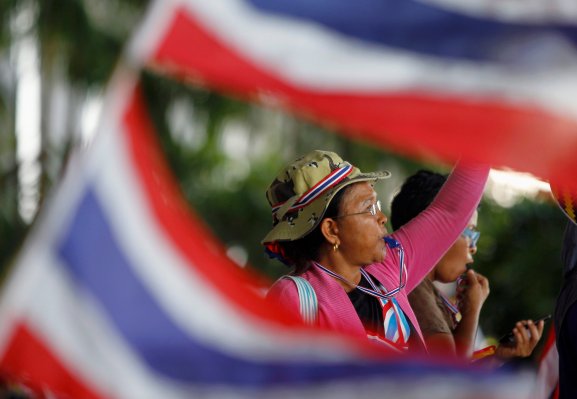 Grenades and Gunfire as Bangkok Protests Turn Bloody
Next Up: Editor's Pick