For so long, mothers – particularly older moms — bore the brunt of responsibility for genetic disorders in their children. And for good reason. Eggs are stockpiled from birth, not made anew with each monthly reproductive cycle, so eggs stored for decades until childbearing can develop genetic mutations. The older the mother, the greater the chance of abnormalities that can contribute to conditions such as Down syndrome, especially after age 35. Fathers, on the other hand, constantly make sperm, so their reproductive contribution was supposed to be fresher and free of accumulated DNA damage.

That may not actually be the case, however, according to the latest study in JAMA Psychiatry investigating how advanced paternal age can affect rates of mental illness and school performance in children. After a groundbreaking genetic analysis in 2012 highlighted the surprising number of spontaneous mutations that can occur in the sperm of older men, scientists have been delving into the relationship to better quantify and describe the risk. While some studies confirmed the connection, others failed to find a link.

In the latest research, Brian D’Onofrio, associate professor of psychological and brain sciences at Indiana University, and his colleagues attempted to address one of the biggest problems with studying the trend. Most of the previous investigations compared younger fathers and their children to different older fathers and their offspring. “That’s comparing apples and oranges,” says D’Onofrio. “We know young fathers and old fathers vary on many things.”

So his team turned to birth registry data from Sweden and compared children born to the same fathers, evaluating the siblings on various mental health and academic measures. The study included 2.6 million children born to 1.4 million fathers.

What they found surprised them – so much so that they spent about two months re-evaluating the data to make sure their numbers were correct. While the previous genetic study found that an older father’s DNA may account for about 15% of autism cases, D’Onofrio’s group found that the increased risk for children of fathers older than 45 years soared to 3.5 times compared to that of younger fathers. Children of older fathers also showed a 13 fold higher risk of developing attention deficit-hyperactivity disorder (ADHD), a 25 times greater chance of getting bipolar disorder, and twice the risk of developing a psychosis. These kids also had doubled risk of having a substance abuse problem and a 60% higher likelihood of getting failing grades in school compared with those with younger fathers.

“What this study suggests is that the specific effect of older paternal age may actually be worse than we originally thought,” says D’Onofrio.

The scientists controlled for some of the well-known factors that can account for poor grades and psychoses and mental illnesses, such as the child’s birth order, the mother’s age, the mother’s and father’s education level, their history of psychiatric problems, and their history of criminality. Even after adjusting for these possible effects, they still found a strong correlation between higher rates of mental illness among younger siblings compared with their older ones.

The 2012 genetic study pointed to a possible reason for the higher rates of mental illnesses – because genetic mutations tend to accumulate each time a cell divides, older men may build up more spontaneous, or de novo, changes each time the sperm’s DNA is copied. While a 25-year-old father may pass on an average of 25 mutations to his child, a 40-year-old dad may bequeath each offspring as many as 65; the researchers calculated that the de novo mutation rate doubled with every 16.5 years of the father’s age. In contrast, regardless of her age, a mother tends to pass on about 15 mutations via her eggs.

The findings still need to be repeated by other groups, but the large sample size and the careful way that the researchers designed the study – to analyze the same fathers over time – suggest that the association is significant and worth considering for those who put off having a family. “This study suggests that paternal age does need to be considered as one of many risk factors associated with children’s mental health,” says D’Onofrio.

Whether it gains the same amount of weight that maternal age does in family planning decisions isn’t clear yet, but even if it is confirmed, he notes that the correlation doesn’t predict that every child born to an older father will develop a mental illness. Older parents also have protective factors against these disorders, including more maturity and financial and social stability, that can offset some of the effect. 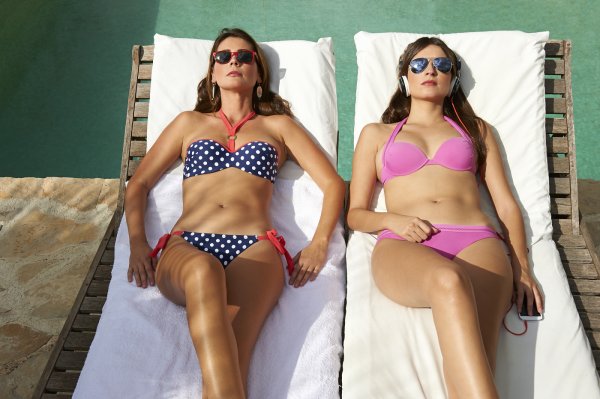 Is Too Much Tanning a Mental Illness?
Next Up: Editor's Pick