Maria Shriver: Jill Abramson Will Be Fine—Low-Income Women Are the Ones in Trouble

The abrupt firing of New York Times Executive Editor Jill Abramson has set off a firestorm in the media opinion-sphere. The sparks are flying everywhere — sparks ignited by phrases like “pay gap” and “leadership gap,” “pushy women,” and “bitchy bosses.” It has triggered heated discussions around he-said-she-said, who’s right, who’s wrong, who screwed up, who’s to blame.

I don’t know all the ins and outs of the Abramson case, but I do know this: Jill Abramson is going to be fine. What I also know is that the gender pay gap in this country is real, especially for low-income working women. That’s who isn’t doing fine.

As we reported earlier this year in The Shriver Report: A Woman’s Nation Pushes Back from the Brink, women are about half the U.S. work force, but the average woman earns only 77 cents for every dollar the average man makes (and women of color earn even less). That pay gap is one reason that one in three working women in this country lives on or over the brink of poverty. In fact, nearly 70% of the more than 100 million Americans living on the brink of poverty, or churning in and out of it, are women and the children who depend on them.

Not doing something about this gaping hole in our economy is penny wise, but pound foolish. According to new economic research, closing the gender pay gap would not only cut poverty in half for working women and their families, it would also pump nearly half a trillion dollars in additional income into the U.S. economy. How? Because these women would be less likely to sock their money away for a rainy day. They would spend it — on food and clothes for the family, on transportation, on education, on goods and services in their communities.

We really can’t talk about how women lead until we talk about how women work. The gender wage gap isn’t the only problem. We have a culture that doesn’t value the paid care work so many women do — including nursing aides, psychiatric aides, and home health care aides. More than 70% of low-wage workers get no paid sick days at all. And what about all the unpaid caregiving women do? This is the only industrialized country on Earth without a national childcare or family leave policy, so millions of working American women see their paychecks gobbled up by their child care costs and the cost of taking time off to care for their elderly or sick parents. That means they work less and can’t get ahead.

This year, Equal Pay Day fell on April 8th, which means the average woman who worked all last year had to work until that day of this year to make what the average man earned in 2013. Because knowledge of what your male and female co-workers make is power, on April 8th, President Obama signed two executive orders to narrow the gender pay gap. One order bars federal contractors from punishing employees who share information about how much they earn, and the second requires those same contractors to report the salaries of their workers to the federal government, according to sex and race.

These measures affect only about one-fifth of the nation’s work force, but it’s a start. The Paycheck Fairness Act, which would extend these regulations to the rest of our workers, has been blocked multiple times in Congress. And how about the minimum wage? Women make up nearly two-thirds of the minimum-wage workers in this country, but the bill to raise the federal minimum wage has also been blocked. The good news is that seven states and many cities have increased their own minimum wage this year, and 30 other states are considering it.

How do we get real nationwide change in our policies and practices so we can help women, who are not only half of our workers but also about two-thirds of the primary or co-breadwinners in American families? One way is by electing officials who support what I would call “A Woman’s Nation” platform: legislation like paid sick leave, paid family leave, a livable minimum wage, affordable pre-K and child care — legislation to help these women be productive, stay in the work force, and earn wages that support their families and therefore boost the economy. That would be good policy for men and for women.

So while the opinion-sphere heats up with back-and-forth about Jill Abramson and The New York Times, tens of millions of hard-working women struggle to keep their families off the brink, struggle to care for kids and parents, and struggle to choose between missing a day of work and missing grandma’s doctor appointment. The truth is, we are already A Woman’s Nation, and real change will come only when women’s work — paid and unpaid — gets as much attention as does the newsroom of The New York Times.

Maria Shriver is a mother of four, a Peabody- and Emmy Award-winning journalist and producer, a six-time New York Times best-selling author, and an NBC News Special Anchor covering the shifting roles, emerging power and evolving needs of women in modern American life. Since 2009, Shriver has produced the high-profile and groundbreaking multi-platform Shriver Reports that chronicle and explore seismic shifts in American culture and society affecting women today. While Shriver was California’s First Lady from 2003 to 2010, she spearheaded what became the nation’s premier forum for women, The Women’s Conference. 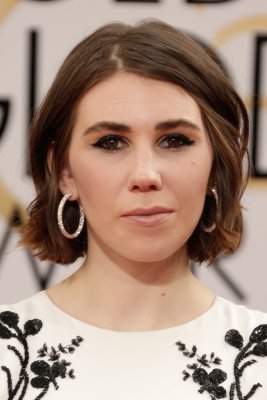 This Girls Star Says Feminism Isn't About Leaning In
Next Up: Editor's Pick