Incumbent Congressman Mike Simpson speaks at a televised debate for the upcoming Republican primary election at the studios of Idaho Public Television in Boise, Idaho May 11, 2014.
Patrick Sweeney—Reuters
By Alex Altman

Some residents of eastern Idaho began finding unusual political leaflets in their mailboxes in recent weeks. They were pop-up books with three-dimensional flaps, printed on fancy paper stock. Paid for by the National Association of Realtors, the leaflets plugged Representative Mike Simpson, the eight-term incumbent in Idaho’s Second District, as the best choice in Tuesday’s Republican primary.

Simpson’s primary race in sleepy Idaho is one of this year’s premier proxy fights between the insurgent and Establishment factions fighting for control of the Republican Party. Simpson has the support of the GOP’s powerful business lobbies, while attorney Bryan Smith earned the endorsements and backing of national conservative groups like the Club for Growth. The glitzy mailers, part of the realtors’ $300,000 campaign to boost Simpson, were a symbol of why he appears set to prevail, just like many other Establishment candidates on Tuesday and throughout the 2014 primary cycle.

Money talks in elections. And the GOP’s grandees are spending lots of it. A massive fundraising push is the biggest factor in the early success of the Establishment’s primary campaign, which aims to prop up vulnerable incumbents and defeat volatile insurgents who might jeopardize the party’s chances in November.

The Idaho contest is a case in point. A pragmatic ally of House Speaker John Boehner, Simpson came into the crosshairs of Tea Party groups for his votes to bail out the banks and increase the debt limit. The Club, the Senate Conservatives Fund (SCF) and a host of other Tea Party–aligned groups vowed to unseat Simpson, casting him as too liberal for the deep-red district. “In Idaho terms, it’s been a really heated race,” says Trevor Thorpe, executive director of the Idaho GOP.

But when it came time to back up the war cries with cash, the business lobbies followed through on their promises, while the Tea Party groups were mostly absent.

Simpson outraised Smith $1.9 million to $781,000, according to data compiled by the Center for Responsive Politics. Outside groups backed Simpson by an even bigger margin, plowing $2.2 million into ads enumerating his merits. Defending Main Street Super PAC, a moderate Republican group dedicated to supporting more mainstream Republicans, spent nearly half a million dollars. The U.S. Chamber of Commerce, which outlined plans to secure Simpson’s nomination last fall, spent $725,000, held four events on the ground to tout Simpson and helped organize a robust coalition of business groups behind his candidacy. At least five other associations and business lobbies spent six figures to back Simpson, including the NRA. The incumbent also benefited from the endorsement of former presidential nominee Mitt Romney, an influential figure in a district with a high concentration of Mormons.

In contrast, the Club for Growth was the lone national conservative group to put major money behind Smith. The group’s PAC spent about $500,000 before pulling out of the race in late April. The decision was a tacit recognition that its money could be better spent in other contests, like the Nebraska Senate primary that its favored candidate, Ben Sasse, won last week. “We’re in a constant state of assessing and reassessing our races, moving resources in and out — depends on the day or week,” says Barney Keller, a spokesman for the Club.

The same fundraising advantage is expected to power Establishment candidates to victory in several primaries around the country on Tuesday. In Kentucky, Republican Senate minority leader Mitch McConnell is expected to coast to victory over conservative challenger Matt Bevin, thanks largely to his fundraising muscle. McConnell, the top Tea Party target this cycle, hauled in a jaw-dropping $21.7 million, dwarfing Bevin’s $3.7 million.

And in Oregon, physician Monica Wehby leads conservative state legislator Jason Conger in GOP primary polls, thanks in part to a fundraising advantage. Business-friendly Republicans believe Wehby, considered the more moderate of the two candidates, would ease the party’s deficit with female voters.

“We think we’re going to have a good one tomorrow night in Idaho, in Kentucky and in Oregon,” says Scott Reed, chief strategist for the Chamber of Commerce. One of the main reasons, Reed says, is that apart from the Club, most of the groups that raise money by touting themselves as Tea Party champions often pocket the cash instead of spending it on candidates. “Most of the other groups are frauds. They’re moneymaking schemes for a handful of consultants,” Reed says. “We’re at a point where it’s a fault line in the party. They’ve left a lot of guys on the field.”

The anemic Tea Party fundraising has exposed an unseemly truth: an endorsement often benefits the group that makes it more than the candidate receiving it. Heralding candidates as the next conservative savior helps Tea Party organizations rake in bundles of money, which they often reinvest in more fundraising appeals instead of winning elections. “A lot of these groups are raising money, but they’re not spending it on campaigns,” says a conservative Republican strategist who requested anonymity to avoid offending allies. “Sooner or later these outside groups have to decide whether or not they want the Club and SCF to carry the entire load in these races.”

Tea Party organizations argue that even when they lose elections, they are shaping the party’s future by forcing candidates to hew more closely to conservative doctrine. “We’ve already changed the narrative, and the Republican Party is running on the principle of limited government,” Matt Kibbe, CEO of the conservative advocacy group FreedomWorks, told the Associated Press.

Yet changing the narrative is easier when your candidates win. FreedomWorks threw its support behind Smith in Idaho’s Second District last September, slamming Simpson as an “insider” who’s been “on the wrong side of all the major fiscal issues.” But in the end, it put less than $32,000 behind the campaign to beat him. 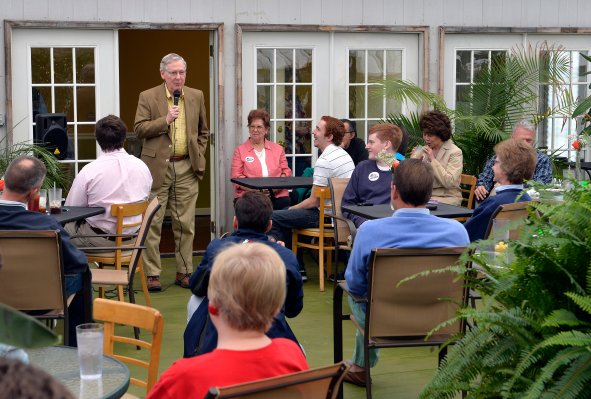 How McConnell Conquered the Kentucky Tea Party
Next Up: Editor's Pick