So, you’re graduating this month and school administrators feel a sudden desperate need to hire someone famous to toss advice at you like over-engorged water balloons of wisdom. When it’s over, you will be soaked with insight and inspiration. After four years of intense studying, what new understanding can be offered in 20 minutes under a hot sun in a stifling rented gown worn by a thousand other sweaty grads with itches of unknown origin? Or is parading some celebrity speaker merely an eleventh-hour attempt to convince your parents that you got their money’s worth?

Harvard, Yale, Stanford, let me save you some money on speaker fees. I’ve put together a mix-tape of four Motown songs that will tell graduates everything they need to know to march forward happily and successfully through life. Get the party started by playing these songs at graduation, maybe with the Dean of Students holding a boom box over his head like John Cusack in Say Anything.

The first song is “What’s Going On” by Marvin Gaye, which came out in 1971 and quickly sold more than 2 million copies. Rolling Stone ranked it as the fourth greatest song of all time. Inspired by one of its composers witnessing an incident of police brutality, the gentle song evolved into a national anthem calling for people of differing viewpoints to put aside their biases about race, age, and politics, and talk things over in a civilized and compassionate way.

Sample Lyrics: “You know we’ve got to find a way/To bring some understandin’ here today.”

Life Lesson To Be Learned: When it comes to important social and political issues, much of the media seems to focus on roid-rage rhetoric rather than respectful discourse. Unfortunately, this only builds the walls higher. An Emory University study centered on the 2004 election, using brain scans of people with opposing political candidates, concluded that when the subjects were told that their candidates had reversed a stance on a key issue, they ignored it. The part of their brain that used reasoning wasn’t activated. Worse, by embracing their biases, their brains’ reward centers lit up similar to what was seen when addicts got a fix. Basically, our brain rewards us when we ignore facts and wrap our selves in the blankie of our prejudices.

That means we have to fight the inclination toward biased thinking and be more open-minded. Let’s give Marvin’s way a chance: “Picket lines and picket signs/Don’t punish me with brutality/Talk to me.”

2. “Shop Around” by The Miracles (featuring Bill “Smokey” Robinson)

This 1960 song was Motown’s first record to sell 1 million copies. In 2006, it was inducted into the Grammy Hall of Fame and the Rock and Roll Hall of Fame named it as one of the “500 Songs that Shaped Rock and Roll.” While the lyrics feature a mother’s advice to her son not to marry too soon, but to “shop around” for the right woman, we can all read between the lines to see that this is just a metaphor for embracing life by trying new experiences.

Sample Lyrics: “Just because you’ve become a young man now/There’s still some things that you don’t understand now/Before you ask some girl for her hand now/Oh yeah, you better shop around.”

Life Lesson To Be Learned: According to a 2013 Harris Poll, only one in three Americans say they are very happy. And that’s fewer than reported feeling that way in 2011. Smokey isn’t just saying shop around for a spouse, he’s saying don’t be too quick to jump into a long-term relationship with a career, with a mortgage, with overwhelming responsibilities. Take some time to find out what’s important to you, not just what’s expected of you.

3. “I Heard It Through the Grapevine” by Marvin Gaye

This song was first recorded by Smokey Robinson & the Miracles in 1966, but it was Marvin’s 1968 version that became the biggest Motown hit of the time. The song is included in Rolling Stone’s “500 Greatest Songs of All Time.” On the surface, it’s about some poor guy agonizing about a rumor he heard that his girlfriend is going to dump him. But, really, it’s a subtle meditation on both the advantages and dangers of the inter-connectedness of contemporary society — even more relevant today in a world of Twitter, Facebook, Instagram, and Snapchat.

Sample Lyrics: “People say believe half of what you see/son, and none of what you hear./I can’t help bein’ confused.”

Life Lesson To Be Learned: The “grapevine” is now a vast network of Facebook “friends,” web trolls, and other random individuals that create a virtual life that may be interfering with us living actual life. A University of Michigan study of college-aged adults concluded that the more they used Facebook the sadder they felt. They also found that using Facebook led to less moment-to-moment happiness and less overall life satisfaction. Part of the reason for this is that it creates a competitive social situation in which the user compares his or her life with what seems like the rich, active, happy lives of those posting their every kiss and knish.

The subtext of Marvin’s song is that we need to tend our grapevine the way a loving gardener tends his plants. Pull the weeds (the “friends” that don’t matter) and nurture the roses (those friends that do matter). Be selective, avoid the trolls of despair, and develop a grapevine that can support your weight.

4. “Midnight Train to Georgia” by Gladys Knight & the Pips

Although Gladys and the Pips actually recorded this song after they left Motown, this 1973 release was their first number one recording and was #432 on Rolling Stone’s list of “500 Greatest Songs of All Time.” In 1999 it was inducted into the Grammy Hall of Fame. The song tells the story of a Georgia man who comes to L.A. to become a star, fails, and returns back home “to a simpler place and time.” His girlfriend decides to give up her life in L.A. to follow him because she’d rather “live in his world than live without him” in her world. To the untrained eye, this is a simple song of love conquering all. But fellow college graduates know that everything is a metaphor for something else that only English majors can understand.

Sample Lyrics: “He kept dreaming (Dreaming)/Ooh, that some day he’d be a star (A superstar, but he didn’t get far)/But he sure found out the hard way/That dreams don’t always come true, oh no, uh uh.”

Life Lesson To Be Learned: American children have been encouraged to dream big and follow those dreams — because there’s nothing that can’t be accomplished with determination and grit. Probably a couple hundred commencement speakers are saying the same thing across America this spring. Whether or not that’s true you’ll have to figure out on your own. What definitely is true is that even those who succeed usually stumble along the way and have to face failure. Fortunately, Gladys and her Pips have belted out some soulful guidance on how to cope: Go back to Georgia, they say, back to that simpler place and time. What they mean is that, following an epic fail, we should go back and re-examine who we are, what we want, and what our values are. Maybe the original goal isn’t what we really want or need. Maybe we need a new plan to accomplish our original goal. But don’t keep charging head-first into the brick wall. Take a step back — back to Georgia.

Now you are prepared to stagger out into a world that wants to both swaddle and swallow you. But when that confusing world has you muttering Marvin Gaye’s words: “Mercy, mercy me/Ah, things ain’t what they used to be,” then it’s time to jam the earbuds in your ears and crank up these four songs. If nothing else, you’ll be able to dance into your future.

Kareem Abdul-Jabbar is a six-time National Basketball Association champion and league Most Valuable Player. Follow him on Twitter (@KAJ33) and Facebook (facebook.com/KAJ). Mr. Abdul-Jabbar also writes a weekly column for the L.A. Register. 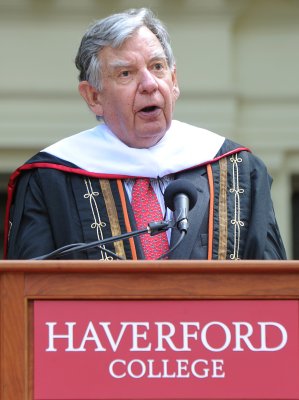 Haverford Students Balk at Commencement Criticism
Next Up: Editor's Pick