Joint security forces on vehicles with heavy artillery stand guard on the entrance road to Libya's parliament area after troops of General Khalifa Hifter targeted Islamist lawmakers and officials at the parliament in Tripoli on Sunday, May 18, 2014.
Libyan national army/AP
By Charlie Campbell

Libya’s interim government has condemned an attack on its parliament and attempted to dispel fears of its ouster.

General Khalifa Hifter, a former rebel commander who claims to have operated with U.S. backing in the struggle to topple former dictator Muammar Gaddafi, suspended parliament Sunday after militia loyal to him attacked the building in Tripoli with truck-mounted artillery, rockets and mortars. Lawmakers fled as gunmen ransacked the legislature, with two people reportedly killed and more than 50 wounded.

Early on Monday, Libyan Justice Minister Salah al-Marghani issued a statement condemning “the expression of political opinion through the use of armed force,” according to the Associated Press. He called “on all sides to resort to dialogue and reconciliation.”

General Mokhtar Farnana, an ally of Hifter, told Libyan TV that the assault was not a coup but “fighting by the people’s choice.”

The unrest, some of the worst to scar Libya since the fall of Gaddafi three years ago, spread to the southern edge of Tripoli and along the airport highway. Hifter had already deployed troops to Benghazi on Friday to battle Islamist militants there, reports Reuters.

Since the end of Libya’s civil war, the nation’s fragile democracy has endured numerous crises. It is currently under its third Prime Minister since March, with no new constitution and politics dogged by relentless squabbling. 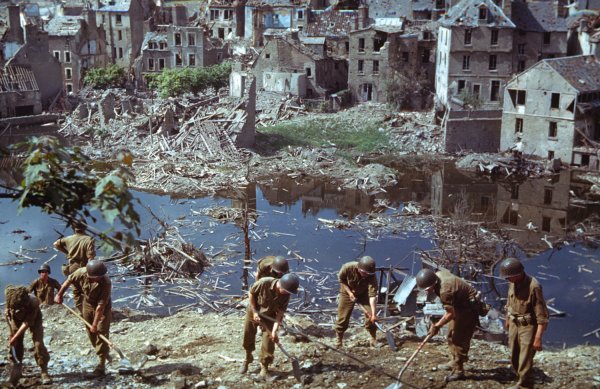 Ruins of Normandy: Photos of a Post-Invasion Wasteland
Next Up: Editor's Pick