While salaries for the top 25 highest-paid public-research-university presidents have swelled in recent years, student debt and faculty-disenfranchisement problems have grown, says a new study.

A report released on Sunday by the progressive think tank Institute for Policy Studies (IPS) looked at how that inflated pay correlated to dwindling funds allocated to student scholarships, and a trend toward more part-time adjunct-professor positions, which do not require benefits and other forms of compensation.

“Administrative spending outstripped scholarship spending by more than 2 to 1 at state schools with the highest-paid presidents,” the report says.

Marjorie Wood, one of the study’s co-authors, told the New York Times that “high executive pay obviously isn’t the direct cause of higher student debt, or cuts in labor spending. But if you think about it in terms of the allocation of resources, it does seem to be the tip of a very large iceberg, with universities that have top-heavy executive spending also having more adjuncts, more tuition increases and more administrative spending.”

The five top-paying schools listed by the IPS were Ohio State University, Penn State, the University of Minnesota, University of Michigan and University of Washington, crunching data from Chronicle of Higher Education, American Federation of Teachers and Institute for College Access and Success.

The Chronicle’s recently released stats showed that presidents’ base pay, already in the six-figure range, was often only a small part of their “total compensation” for the year.

“From FY 2006 to FY 2012, spending on nonacademic administration rose 65%, much faster than spending on scholarships in the top 25,” says the report.

In 2012, student debt across the country hit $1.2 trillion. But student debt at the colleges with highest-earning presidents grew at a 13% faster rate than the national average, partly because higher executive pay translates into less funding available for scholarships, the study says.

Lack of benefits, shaky job security and inadequate pay for adjunct professors have also become an issue of growing concern, illustrated starkly in separate papers by Service Employees International Union, The Coalition on the Academic Workforce and U.S. House Committee on Education and the Workforce, cited in the IPS report.

The study was particularly critical of university boards of trustees, which determine how to pay the president. 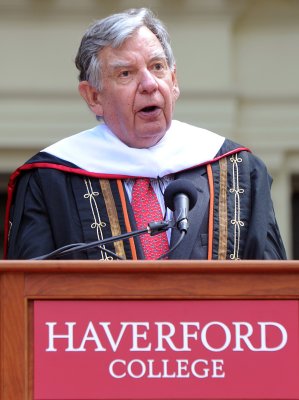 Grad Speaker Calls Out Students for Protest
Next Up: Editor's Pick