California Chrome #3, ridden by Victor Espinoza, head to the finish line enroute to winning the 139th running of the Preakness Stakes at Pimlico Race Course on May 17, 2014 in Baltimore.
Molly Riley—Getty Images
By Nolan Feeney

Prize racehorse California Chrome’s bid to win the Triple Crown is apparently back on, after state officials reportedly agreed to let the the Kentucky Derby and Preakness Stakes winner wear a nasal strip at the Belmont Stakes.

ESPN, citing unnamed sources within the California Chrome camp, reports the colt has been given the go-ahead to wear a nasal strip in the third and final race for the crown by New York Racing Association steward Steve Lewandowski.

California Chrome has worn a nasal strip, which help horses breathe, throughout his recent six-race winning streak. However, New York officials have a history of banning the strips: Back in 2012, horse I’ll Have Another wore nasal strips during its Kentucky and Preakness wins, but was going to be barred from doing so at Belmont. (The point became moot when Another was scratched after a leg injury.)

If California Chrome wins at Belmont, it would make him the first Triple Crown winner since 1978. 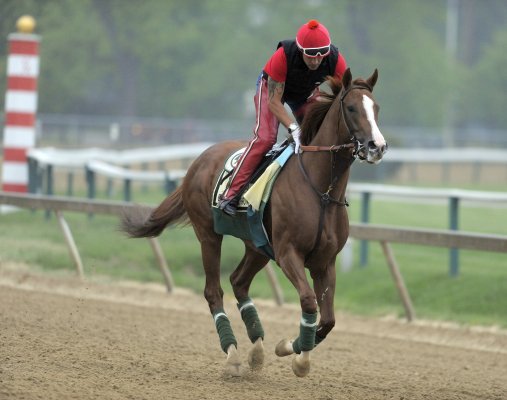 California Chrome Favorite To Win Preakness
Next Up: Editor's Pick