How I Almost Got to Decide the Next XPRIZE

Pro-tip: if you’re trying to pitch a winning concept for an XPRIZE contest, get NY1 news anchor Pat Kiernan on your team. I’m pretty sure Kiernan’s presence — and his smooth, TV-honed baritone on stage — was the main reason why the idea designed by Pat, myself and TIME’s Siobhan O’Connor made it to the finals here at XPRIZE Visioneering. We didn’t win — in what I would describe as grand larceny, we lost out to a contest focused around developing forbidden sources of energy. But for three journalists with pretty much zero experience in the digital innovation field, I’d say we did pretty well.

But I’m getting ahead of myself. I was in sunny Palos Verdes in southern California for XPRIZE Visioneering. It’s a now annual summit that brings together some of the smartest and most influential people in the world — and a few journalists like myself — to brainstorm what could become the next multi-million dollar XPRIZE concept. XPRIZE was founded in 1995 by the engineer, entrepreneur and relentlessly positive futurist Peter Diamandis, to incubate prize-driven contests meant to inspire innovation. The first XPRIZE is still the most famous — the Ansari XPRIZE, which offered $10 million to the first privately-financed team that could build and fly a three-passenger vehicle 62 miles (100 km) into space twice within two weeks.

It took 26 teams investing more than $100 million dollars for eight years before the prize was won by Mojave Aerospace Ventures, which completed their flights in the custom-built SpaceShipOne. Private space travel was a dream before Diamandis established the XPRIZE — today, the industry is worth more than $2 billion, as entrepreneurs like Elon Musk and his SpaceX company successfully put satellites in orbit without NASA’s help. “It used to be only governments and big companies that could play on a scale like this,” Diamandis has told me before. “But times have changed and accelerated in the direction where agents of change are small entrepreneurs who are enabled by new technologies to do extraordinary things.”

As you might be able to tell from the buzzwords, XPRIZE is extremely Silicon Valley. The contests the foundation has formulated unleash digitally-empowered entrepreneurs on some of the very problems where the government has failed, like ocean health and oil spills. Diamandis himself isn’t shy about the scale of his ambitions. “This is where we imagine the future and create the future,” he told the audience at the opening of the Visioneering conference. “We’re living in a world where you can solve ideas and not just complain about them.” It’s a vision where doing good also means doing well, where an intractable problem like child poverty isn’t a failure of global will, but a market failure. Those who can innovate successful solutions won’t just help the world, they’ll be helping themselves — starting with the multi-million dollar checks that come with an XPRIZE win.

But such contests actually aren’t new. Before centralized government and corporate R&D boomed in the post-WWII era, one of the best ways to encourage innovation was through a prize contest. Some group or person — the government or an individual tycoon — would set out a challenge with a cash reward. The British government did this back in 1714 with the Longitude Prize, to be awarded to the first person who could develop a way for a seagoing ship to measure longitude. The prize was won not by a navigator or ship’s captain — the class of experts who had been trying and failing to discover a solution — but by a clock maker named John Harrison. The 25-year-old Charles Lindbergh became the first person to fly nonstop from New York to Paris in 1927 in order to win a contest established by a hotelier named Raymond Orteig. (It was the Orteig Prize that directly inspired the Ansari XPRIZE for space travel.) Lindbergh took home the $25,o00 winnings — and everlasting global fame — but more importantly, the prize kicked off global air travel, seeding an industry of vastly greater value. “Within 18 months of the contest, air passenger traffic had gone up 30 times,” says Chris Frangione, the vice president of prize development at XPRIZE. “This is why prizes are so powerful — they leverage resources.”

The point of the Visioneering conference was to brainstorm the next contest. No one thought small. Bill Gross, the CEO of Idealab, urged the audience to try to solve Beijing’s killer air pollution problem. Shaifali Puri, the executive director for global innovation at Nike, told us to aim for a “moon shot for girls,” to find a way to ensure that tens of millions of girls around the world received the education and protection they needed to flourish. Ratan Tata, one of India’s richest men, said we should focus on the malnutrition and housing woes that still hold back the developing world. “It’s not just tech and it’s not just start-up companies,” he said. “It’s making a difference for disadvantaged people.”

To do that, we needed ideas, and we slotted ourselves into different tracks for brainstorm sessions. I took the future of cities on the first day, where New York University’s Paul Romer, who told us that “cities are where the action is.” We were broken into groups and asked to devise, bit by bit, a new contest that could produce an innovation that would improve life in cities, for the poor and for the rich. Once we’d completed that task — a process that used a lot of Post-It notes and whiteboard space — we pitched our ideas to the larger group, and voted on which one would move to the next stage. I should have known that my group’s idea — loosely centered around finding a way to provide infinite water to urban households — might be in trouble when we began debating whether to play Louis Armstrong’s “What a Wonderful World” during the pitch. (Our title: “What a Watterful World.” I know.) We did not advance.

But that experience was useful for the next day’s session, on disaster prediction and response. The seismologist Lucy Jones — whom Los Angeles residents know as the “Earthquake Lady” for her ubiquity on TV every time a temblor strikes Southern California — told us the unsettling fact that the next big quake that strikes the San Andreas Fault could essentially cut off water to L.A. for months. We were broken into groups again, and tasked with designing a contest that would help cities prepare and bounce back from the next big natural disaster.

I roped in Siobhan, who had come to Visioneering as my guest, and NY1’s Kiernan, who had also come as a guest and who had only landed in L.A. that morning. None of us were disaster experts, unless you can count living through Superstorm Sandy in New York City. But between the three of us — though sleep-deprived and inexperienced — we managed to come up with a pretty decent idea. We’d called it Web in a Box: to win our proposed contest, a team would have to design a piece of technology capable of providing backup internet service on a neighborhood by neighborhood basis in the event of a sustained blackout following a disaster. Our rationale was that the Internet is now the most important communication hub we have, as vital a resource in the aftermath of disaster as food and water — and not just because you can’t tweet about a disaster if you can’t get online.

We honed our pitch and made it through the initial stages, where the entire Visioneering conference is brought together to vote on different ideas. We were even one of the five pitches that went up against each other in the finals on Saturday night—but no fault of Pat’s, we eventually went down in defeat, as the entire conference cast their votes in what felt a bit like a high school election contested by very rich and powerful people. The winner was a contest that offered $20 million to anyone who could prove an effective, entirely new form of energy. Ambitious, but I still say we were robbed. (We also came out behind a contest that offered prize money to develop a water cleaning system capable of filtering out the microscopic amounts of prescription drugs that are now found in our drinking water. This pitch memorably featured the actress Patricia Arquette asking the audience if they’d taken Viagra that day.)

The winning Visioneering idea won’t automatically become the subject of the next contest, but it will get automatic consideration by the foundation’s board as they decide the subject of the next XPRIZE. The winners also received a trophy created by a 3D printer, which might be the most XPRIZE thing that happened all weekend. We live in a strange age where we seem beset by enormous problems that seem to have no realistic solution: climate change, global inequality, the Alzheimer’s epidemic. As a society, we seem helpless in the face of those ills, gridlocked before looming catastrophe. Sometimes it’s hard to share Diamandis’s relentless optimism. And yet, he’s not wrong: the spread of information technology and education has made it possible as never before for anyone to put forward their solutions — and to be heard. “There is no problem that can’t be solved,” Diamandis said at the close of the conference. “We are heading towards an extraordinary world.” That’s a prize we can all share. 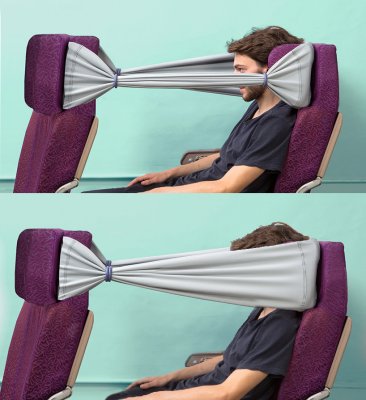 This Is the One Innovation That Might Make Flying Less of a Pain
Next Up: Editor's Pick