The unceremonious firing of the New York Times’ top editor last Wednesday helped push into public view a tough assessment on the future of newspapers in a digital world—and just how challenging it can be to change an existing structure into something new.

If you think it’s tough in the newspaper business, imagine how hard it is for the Department of Defense.

The Pentagon is on call 24/7. The nation doesn’t have the luxury of trading it in for a new model, like you might do with a car. You’ve got to keep the old one humming along, while nurturing its evolution into something better-suited for the information—instead of the industrial—age.

But seeing as this is the weekend—and Saturday is Armed Forces Day, no less—what if we were able to start with a fresh slate and build a new American military from the ground up? How close would it resemble what we’ve already got?

Not much, according to the recommendations of Shawn Brimley and Paul Scharre, a pair of ex-Pentagon officials now at the influential Center for a New American Security think tank. They’ve posted a provocative piece over at the Foreign Policy website entitled CTRL + ALT + DELETE—Resetting America’s Military. Among other radical ideas, they’re proposing doing away with the Army, Navy, Air Force and, God forfend, the Marines.

They’d replace them with expeditionary corps (civil-affairs types and others who partner with allies abroad), operator corps (the ones who do the shooting, on land, sea and sky), cyber corps (the computer geeks), and commando corps (who’d rescue hostages, kill Osama bin Ladens and corral loose nukes).

“Unlike today’s military services, the corps would not own forces but would only manage personnel,” they propose. “Standards for recruiting, physical fitness, education, and even ideal personality traits would vary among them.”

But you may not want to spend too much of Armed Forces Day weekend pondering their proposal. “The one thing that we know about this idea is that it’s never going to happen,” says David Rothkopf, Foreign Policy’s editor. “It would involve confronting moneyed, entrenched interests in the private sector as well as the Pentagon, which kills ideas that threaten its core programs more efficiently than it does any foreign enemy. This is the military-industrial complex that Dwight Eisenhower warned us about as he prepared to leave office—except today it is bigger and more powerful than it has ever been.”

Of course, if you think these guys are full of beans, check out Jay Nordlinger’s piece in the latest National Review: Ike as Weapon—The use and abuse of Eisenhower’s Farewell Address, with its warning about the ‘military-industrial complex’.

“It’s always a tricky business to try to speak for the dead, or to claim to do so,” Nordlinger says. “But given everything we know about Eisenhower, I believe he would be in the camp of those who say our defenses are dangerously low, inviting of aggression.”

And if you think he’s full of baloney, here’s that passage from Eisenhower’s January 17, 1961, address for which the Army-five-star-general-turned-President is best remembered. It makes for good reading on Armed Forces Day—or any other. 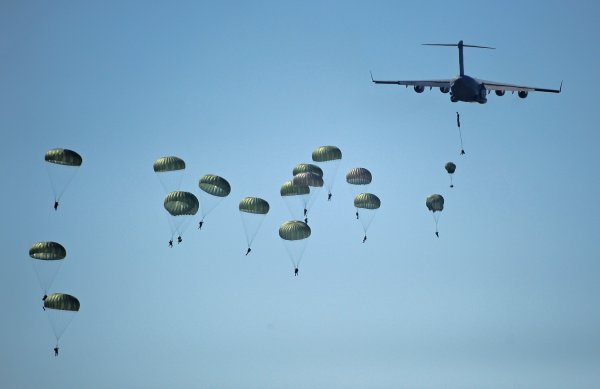