The House Shows Boom: How the Real Estate Market Is Reflected on TV

Nate Berkus knows a lot about houses. The celebrity designer, who got his start with Oprah Winfrey’s endorsement and now makes news with his personal life, has spent years renovating and redecorating homes for TV-viewers’ pleasure. The latest evidence of his know-how is his role as host of the NBC home-improvement competition American Dream Builders, which has its first season finale on May 25.

But Berkus’ knowledge isn’t just limited to the houses themselves. During a recent conversation about the appeal of home-improvement shows, he told TIME that he has a theory about why they’re so popular. “No matter who we are, no matter how much money we have or don’t have, no matter where we are in the world, everybody wants to live better,” he said. “When we watch shows that inspire us to make changes in our own homes, when we see how other people live, I think that’s a really powerful message.”

Berkus added that he saw home design on TV for the first time with TLC’s Trading Spaces, which debuted in 2000, a one-time behemoth in the genre and the show that helped make decorating cool by supplementing the staider fare that has held court on public television for years (This Old House, Hometime). In the years since, he’s come to believe that viewers are looking for “inspiration” and really do want to change their lives, that even if viewers are not exactly going to replicate the projects at home they’re still interested in fixing their real-life living spaces.

But how much do such shows really correspond with what viewers are likely to be doing with their homes?

It turns out, Berkus may be onto something. If you compare the number of home shows on air during a given calendar year to real-world housing statistics, including housing starts, sales of existing homes and foreclosure filings, the numbers seem to follow a pattern. (Especially if you ignore shows on networks like HGTV and DIY, where they have to fill up their schedules pretty exclusively with home-improvement shows; on a network like TLC, the presence of home shows is more of a choice.) Here’s what we found:

Shortly after Trading Spaces took off, there was a burst in house-related shows, peaking around 2005 with a television schedule that included Trading Spaces, While You Were Out, Trading Spaces: Boys vs. Girls, Monster House, Extreme Makeover: Home Edition, This Old House, Moving Up, Hometime, Flip That House, Flip This House, Sell This House and Property Ladder. Shortly after, the number of such shows declined. It’s worth noting that 2005 was right around when January housing starts and existing-home sales were way up.

On the other hand, 2010, when nearly as many housing shows were on air, was right after both housing starts and home sales hit a low and foreclosure filings hit a high. As the housing market has begun to recover from that bubble, the number of home-related shows has also increased, though not to the extent that was seen before the bubble.

Housing shows today aren’t the same as they once were. When Trading Spaces started, the genre was about redecorating and making the most of the space you lived in; the past decade has seen the growth of shows that are about improving houses in order to sell them rather than live in them.

It’s impossible to say whether there’s any causal relationship between the housing market and housing shows — some factors, like the celebrity of a person like Berkus, have little to do with stuff like mortgage data — but some of the relationships seem pretty obvious. For example, foreclosed homes are a big draw for house flippers who intend to buy cheap, fix up and sell for more; accordingly, the huge jump in foreclosure filings around 2006–2008 matches the jump in flipping shows around 2007, when more fodder for those shows was available. (Another possible explanation: more people having a harder time selling their homes means more people interested in watching homes be sold successfully on screen).

And again, while there’s no way to prove a causal link, the correlation may indicate good news for homes on- and off-screen. Though 2014’s crop of home shows so far remains below pre-bubble levels, those looking for hopeful signs may be able to find them on TV — and not only with Nate Berkus.

Though Berkus has made his fame in the renovation and redesign business, Jeff Lewis, who is behind a slew of Bravo shows, launched his first series, Flipping Out, right in the middle of the housing crisis, as foreclosure numbers climbed. A more recent edition to his oeuvre, however, deviates from the formula: during Interior Therapy with Jeff Lewis, which debuted as sales and construction climbed, the houses are renovated rather than flipped. His clients live in them, invest money in them, and plan to keep living there after. And that’s apparently what audiences want to see: the show’s second-season finale, which aired in September, drew its highest ratings yet. 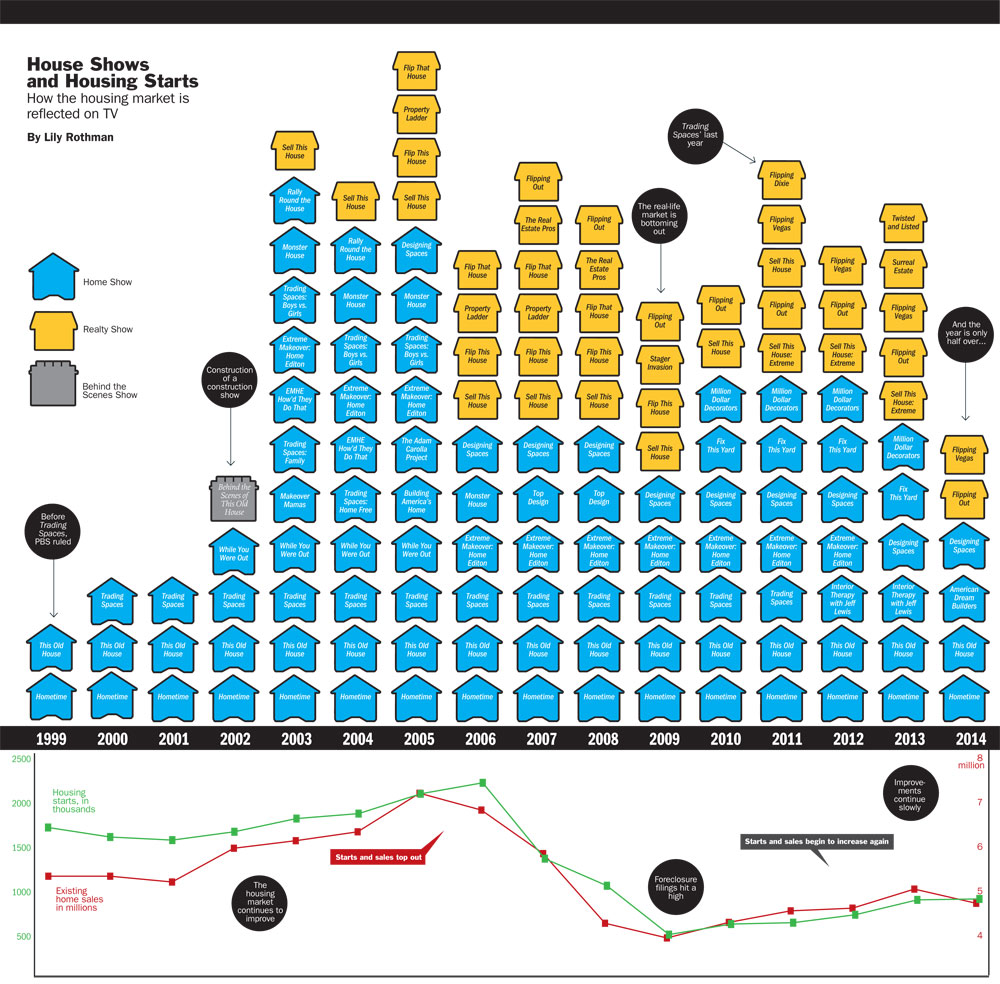 The Normal Heart: How to Transplant a Play
Next Up: Editor's Pick