This is the Best Gay Marriage Debate You'll See All Year

Everyone take a moment to thank Idaho for being Idaho, because what you are about to witness is a rare, rare treat.

Idaho’s gubernatorial GOP primary debate Wednesday night was basically hijacked by two long-shot candidates whose considered opinions on same-sex marriage—recently, if temporarily, ruled legal in the Gem State—were more reminiscent of sketch comedy than anything recognizable as a policy debate. Gov. Butch Otter (whom we have to thank for the long-shot candidates’ presence since he, apparently, demanded they be allowed to participate) squared off against his Tea Party challenger state Sen. Russ Fulcher, but anything they had to say was entirely eclipsed by the magnificent performances of Harley Brown and Walt Bayes, especially on the topic of same-sex marriage.

“I don’t like political correctness,” said Brown, who showed up to the debate wearing a tie and biker leathers with a breast pocketful of cigars. “Can I say this? It sucks. It’s bondage. And I’m about as politically correct as your proverbial turd in a punch bowl.”(20:30) The former Navy engineer says God told him to run for President.

Brown plans to fight the feds using a tactic he calls “blitzkrieg” that begins with spiritual warfare. “Here’s my plan of attack: you go in there and you use spiritual warfare. Everybody talks about the natural but I’m gonna talk about the other realm we exist in.” (34:00) He then proceeds to do just that for awhile.

Unlike his opponents on the stage, Brown supports same-sex marriage. Idaho’s ban on gay marriages was overturned by a federal judge Tuesday, only for the ruling to be stayed on appeal Thursday. “I used to drive taxis in Boise for 20 years, at night, and I’ve picked up my fair share of the gay community and they have true love for one another,” he said. “I’m telling you, they love each other more than I love my motorcycle.” (9:00)

Also in contention to be the state’s top executive Wednesday night was Walt Bayes, a white-bearded father of 16 whose main qualifications for office, the way he tells it, seem to be his fierce opposition to abortion and his claim he once went to jail for homeschooling his kids. “I can stand up where these guys are falling down,” he said. “I don’t know how to put it but—how many of them have been to jail for what they believe?” (22:00)

When asked for his position on same-sex marriage Bayes just read a Bible verse for something like a minute. (10:00). And he was kind enough to use his closing statement to warn us about the End Times. (54:30)

Props to the three Idaho journalists moderating, who handled this situation masterfully.

Correction: Because of an editing error, the original version of this story misstated Idaho’s state nickname. 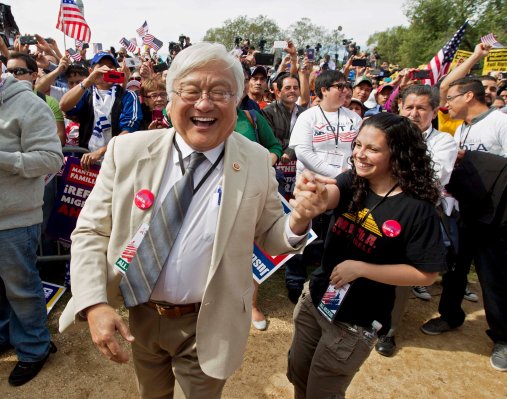