US President Barack Obama leaves the West Wing while walking to the Residence of the White House on May 14, 2014 in Washington.
Brendan Smialowski—AFP/Getty Images
By Haley Sweetland Edwards

Barack Obama was crystal clear during the 2008 campaign about his commitment to ensuring equal treatment of all online content over American broadband lines. “I will take a backseat to no one in my commitment to network neutrality,” Obama told a crowd at Google in 2008. “Because once providers start to privilege some applications or websites over others then the smaller voices get squeezed out and we all lose.”

At a 2007 campaign forum, he went so far as to specifically promise that his Federal Communications Commission appointments would defend the principle of a “level playing field for whoever has the best idea.” “As president, I am going to make sure that that is the principle that my FCC commissioners are applying as we move forward,” he said.

But on Thursday, the President made no public statement when three Democrats he appointed to the FCC voted to move forward with a plan to allow broadband carriers to provide an exclusive “fast lane” to commercial companies that pay extra fees to get their content transmitted online. Instead, White House aides released a press release distancing the President from the decision.

“The FCC is an independent agency, and we will carefully review their proposal,” Press Secretary Jay Carney wrote to reporters after the vote. “We will be watching closely as the process moves forward in hopes that the final rule stays true to the spirit of net neutrality.”

That shift—from a campaign promise to a call for hope—comes after months of public debate over the future of the American Internet infrastructure. In the vote Thursday, the FCC commissioners approved a plan that prohibited broadband providers from blocking or discriminating against content on current lines, but allowed for the addition of faster service options for paying content providers. FCC Chairman Tom Wheeler, who was appointed by Obama last year, has argued that these new “fast lanes” do not violate net neutrality principles.

But at the time Obama spoke at Google headquarters in 2008, the sort of “fast lane” proposal put forward by Wheeler had already been dismissed as a dangerous intrusion on open competition that violated net neutrality. Companies like Google argued that once a “fast lane” was allowed, broadband companies like Verizon and Comcast would lose incentives to upgrade existing online speeds, creating over time a two-tiered Internet that gave advantage to incumbent content producers who could afford to pay the fees. “Creating a new ‘fast lane’ is effectively a method of discrimination, where today’s fast lane becomes tomorrow’s minimum bar,” Google argued in a 2007 submission to the FCC.

On Thursday, the Internet Association, a trade group representing Google and other Silicon Valley giants, restated its belief that the Wheeler plan appears to violate the principles of net neutrality. “We are opposed to all discrimination,” said the group’s CEO Michael Beckerman. Discrimination, he continued, included any regime that allowed prioritizing commercial content for a fee, “even if existing speeds are not downgraded for everyone else.”

The White House statement left open the possibility that the President would come out against the Wheeler plan at a later date, saying the President would consider “any option that makes sense” if the FCC’s final version violates net neutrality. But his options are limited. Obama could propose new legislation but it’s unlikely to pass during an election year.

Net neutrality rules that did not allow a fast lane were established in 2010 by a previous FCC chairman appointed by Obama. But they were thrown out by the D.C. Circuit Court in January this year on the grounds that the FCC lacks authority over the broadband providers, which are not currently categorized under Title II of the agency’s statute.

The proposed rules approved on Thursday asked the public to weigh in on whether the agency should re-categorize broadband providers to fall under Title II, a move that would give commissioners a blank slate to establish new net neutrality rules.

The proposed rules will be open for public comment through July 15. 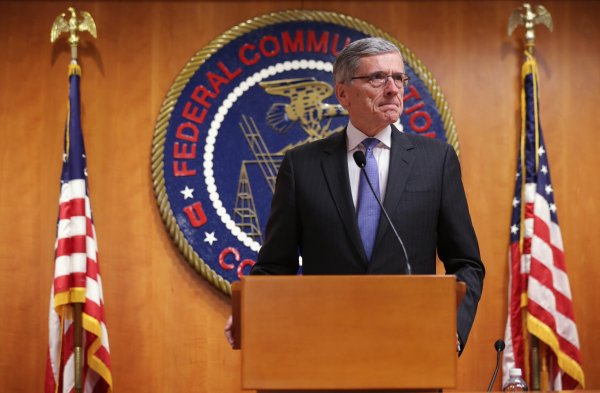 The Web Nears a Fast Lane
Next Up: Editor's Pick