States that voted for Democrat Barack Obama in the 2012 presidential election have, on average, better high school and college graduation rates than states that supported Republican Mitt Romney, according to U.S. Census data.

So exactly how much higher are high school and college graduation rates in blue states than in red states? To find out, research engine FindTheBest first looked at percentage of population by state without a high school degree.

Note, red and blue states as defined by the 2012 presidential election

The data shows that that blue states rank 2.2 percentage points higher on average than red states.

However, graduation rates are fairly colorblind amongst the most well-educated states—split half-and-half within the top 14. It’s at the bottom, where 11 out of the 15 least educated states are red, that the disparities are more visible. And while only one blue state (California) has a population where greater than 17.5 percent of the its residents hold no high school diploma, four red states fall into this category (Mississippi, Louisiana, Kentucky, and Texas).

Red states are also outliers on both ends of the spectrum for high school degrees.

There’s more to Wyoming than Yellowstone National Park. In addition to the best high school graduation rate in the nation, Wyoming has a 5.1 percent unemployment rate (3.8 percentage points below the national average), and a higher than average large upper middle class population. It seems people are catching on—Wyoming’s population grew from 515,000 in 2006 to 576,000 in 2012.

People may be flocking to Texas for its cheap land (the typical home costs $130,000 in Houston) and a non-existent income tax, but the Lone Star state still has some work to do on its high school graduation rates.

FindTheBest crunched the numbers for the percentage of population holding a 4-year degree.

They found that the education gap grew even larger, with blue states outpacing red states by 5.3 percentage points.

All of the top 15 most college-educated states—and only 3 of the bottom 15—are blue. The most educated red state? Kansas, where 30% of the population holds a college degree.

Here are the best and worst states for 4-year degree attainment:

While technically not a state, Washington, D.C. has the highest percentage of residents with a 4-year degree in the nation. Not only is D.C. smart, it’s also extremely wealthy—20 percent of the population makes more than $150,000 per year, which is 11.6 percentage points above the national average.

Unlike wealthy neighboring D.C., West Virginia is a low-income state, which could be related to its low college education rates. More than 32% of the population makes under $25,000 a year—that’s 9 percentage points above the national average. 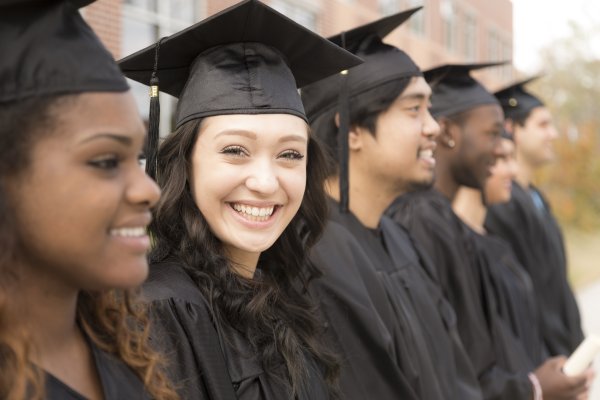 Why I Wish My Guidance Counselors Would Stop Talking So Much About College
Next Up: Editor's Pick