The Star of France's Right-Wing

Photograph by Christopher Morris—VII for TIME
By Vivienne Walt

Marine Le Pen is shaking up French politics, three years after taking over France’s far-right National Front from her father, Jean-Marie. With record low ratings for Socialist President François Hollande, and the opposition UMP conservatives riven by internal splits, the National Front grabbed thousands of mainstream votes in municipal elections in March. Now Le Pen is plotting her assault on the E.U. in the European elections due to take place from May 22-25. She sat down with TIME on April 29 for a cover interview in this week’s European edition. In this Q&A, Le Pen discusses her plans for a radically changed Europe, and her ambitions to run France:

Q: There seems to be a strong chance you will be able to create an official political bloc within the E.U. parliament. What can you do with that?

A: We will defend the country, defend our interests, against the big financial interests, the banks. What the E.U. fights for is big financial interests, and for the banks. These interests are in contradiction with the European people. We’ll try to get pieces of our sovereignty back. We will defend European people all together, to block the advancement of the integration of Europe, which we consider a total failure. We have transferred legislative, budgetary, monetary powers [to the E.U.] Countries have fewer powers than each of the 50 states in the U.S.

Q: Which pieces of sovereignty are possible to reclaim?

A: Controlling our borders. The Schengen agreement [which allows for free movement within a group of E.U. countries], we will fight against. Getting control back over our borders, and the fact that our constitution should have higher powers than the E.U. laws. The right to promote economic patriotism … When there are two people with same qualifications, the priority should be given to the national. Also, like the U.S. has, we should give priority to national companies in the bids for public tenders. Voilà.

Q: Would you rather reform the E.U. parliament, or take it apart altogether?

A: The E.U. is not reformable in its present form. It has to disappear and be replaced by a Europe of nations that are free and sovereign. You can’t reform it just by adjustments. This project is radically different. It’s a totally different ideology. In the E.U. parliament we can block the advancements towards integration. We can block things through referendums, and pose the question to the French: Do you want to stay in the E.U. or leave E.U.?

Q: What is your major argument to get out of the E.U. and the euro?

A: The E.U. has become a totalitarian structure, and if we want to stay a free, sovereign country we cannot remain in it. The only solution is to get out of it.

Q: Many leading economists say an exit from the euro, let alone the E.U., would be an economic disaster.

A: And many economists think the opposite. They think the euro is not viable and that the only path back to get jobs and growth down is to get back the national currency.

Q: Let me ask you about French politics. What effect has the National Front had on its political rivals?

A: The National Front is the center of gravity in French politics. On both right and left, they are taking our ideas. The right has taken the concept of nation, the fight against illegal immigration, getting tougher on crime. The left has totally taken our strategy and language: Giving a big role for government in economic patriotism and protectionism. We are the center of gravity, and they are taking ideology from us.

[But] even though they have taken the ideas, they have never implemented them when they’re in power, and now there’s a lot of disappointment in them in France … The local successes [in the municipal elections] gives us the local roots we need, given how the election system operates in France. Then we also can show what the National Front mayors can do. Our adversaries were saying, ‘okay you have these ideas but we’ve never seen you run things.’ Now we’ll show what we can do.

A: We will lower taxes, which are very high. We will get tougher on petty crime. That is extremely important. The parties are victims of their own lies: They always dramatize the threat of the National Front, saying that cities were going to be a shambles and going to go bankrupt. The simple fact is that we will show that this is a lie, that it’s a caricature.

Q: But some believe you’re a threat.

A: The French no longer believe it. They see a rich country that is on verge of bankruptcy, with massive unemployment. It is easy for [mainstream parties] to instill fear in people, to scare them out of voting for the National Front. Some of our policies are being implemented elsewhere, and it doesn’t bring about catastrophe. In the U.S. you have economic patriotism, the U.S. patrols its borders, they lock up criminals and delinquents, they crack down on illegal immigrants—and it’s not a drama.

France is a country that operates in a slightly strange way, with contradictions. It’s balanced between the market economy and enterprise, and the existence of public services, and a strategic state… It’s also a secular country. It’s very brutalized by the development of communitarianism. That is to say, communities that want special treatment, and special consideration. That is totally against our history, our constitution and way of life. The French are one and indivisible.

Q: Give me an example.

A: For example when a religion demands that at school, kids should be taught sports separately, girls and boys, in order to respect the religion. For us, that is [makes strangling motion]… It is shocking to us. Or a public swimming pool with different opening times for men and women.

A: It’s the big religions, fundamentalist, not just Muslims. Not all Muslims, but Islamists who, now permanently in France, are constantly asking for special treatment.

Q: Right after the municipal elections in March, the first statement you made was a plan to reintroduce pork into the school canteens in the National Front towns. Why make an issue of this? It seems harmless keeping pork off the menus.

A: The fundamentalists began by demanding substitutes for pork. Then they wanted pork and non-pork not be served together. Now they want pork to be banned altogether. Air France now facilitates this by not serving pork, just in order to accommodate a minority. The minority’s needs are being imposed on the majority. If our political adversaries are tacking right, that is not by accident. It is a mischaracterization. Every time people say we are ‘extreme right,’ people think we are racist. The use of the term ‘far right’ is used because they know that it really scares people. In the U.S., that means the Ku Klux Klan in white robes and hats.

Q: You’ve said the immigration situation in France is a “castastrophe.” What’s so disastrous about it?

A: We have no control over our immigration. That is why it is a disaster. As opposed to the U.S., we actually help these people even when they are here illegally. We treat them for free. Their children go to school for free. We give them housing in the projects. We have five million people who are unemployed. We cannot bear this burden. I believe that if the U.S. treated its illegal immigrants as we do, the Americans would be much more against immigration than they are today. The French are treated less well than foreigners, in their own country. This brings about a deep feeling of unfairness. It is grounds for future potential for conflict.

Q: Your opponents hear you talk about immigration and say the party is racist and discriminatory. How do you react to that?

A: Our program is about nationality. We’ve never had anything in it about ethnic background. Now it is certain today that 40% of foreigners in France are unemployed.

Q: Your critics are quite vociferous. Do you receive a lot of threats?

A: We receive death threats all the time. By Facebook, Twitter, and letters, always. Of course. Because there are people who don’t support our ideas and cannot stand the idea that we think differently from them. And the political class contributes to it, by pillorying us and characterizing us as a threat, all the while using our own political arguments as elections approach. It is almost as if they are trying to incite people and pushing them to be violent.

Q: You have said you think the National Front will be in power in a decade. How do you get from here to there, from having just a few seats in the Assembly to actually being in power?

Q: But your father faced a similar situation in 2002. He got into the second round in the presidential elections, and then he faced a huge vote against him in the second round. Why would it be different with you?

A: I think the situation is not at all comparable to 2002. The National Front has gone from being a movement of opposition and protest, to a party that is ready to govern. France has changed as well. People realize that the choices that were put before them were wrong choices. By definition, we have become a party that represents 25% of voters that has restructured itself in a way that is capable of governing.

Q: How different politically are you from your father?

A: It is the context that has changed a lot. My father spent a good part of his life fighting traces of ultra-communism. And I’ve spent a good chunk of my life fighting against ultra-liberalism. Obviously the context and the threats have changed. Today the great threat is ultra-liberalism and not ultra-communism. I’m a woman of my time. My father is a man of his time.

We are not the same generation. Economic patriotism existed then, and today it doesn’t exist at all. I have sensitivity to social conditions but that is also a consequence of the era in which I live. I’m 45 years old, and we’ve been talking about the economic crisis for 40 years. I’ve come to the conclusion that maybe it is the responsibility of the leaders, that perhaps this was the responsibility of the leaders who have been governing for a long time. This crisis did not just brutally fall on us.

Q: Are you close to your father?

A: He’s my father. We have occasions to exchange opinions, and we’re able to exchange opinions. He has a lot of political experience behind him. It would be a shame to deprive myself of this experience, this knowledge, of French political life. So we arrange to see one another regularly, though probably not enough for his liking.

Q: What age did you know you wanted to go into politics?

A: I was not really conscious of it. I fell into it. I was weaned on politics my whole life. I tried to get away from politics, to be a lawyer, but it always caught me, like a virus.

This interview has been edited and condensed for clarity 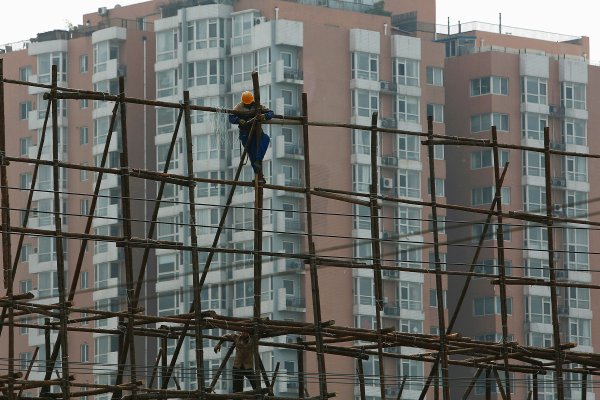 China's Property Bust May Drag Us All Down
Next Up: Editor's Pick