Los Angeles: Demonstrators take part in a protest to demand higher wages for fast-food workers outside McDonald's on May 15, 2014.
Lucy Nicholson—Reuters
By Barbara Tasch and Giri Nathan

Fast food workers demanding higher wages staged strikes in dozens of cities across as many as 30 countries Thursday, alongside 150 similar protests planned in the United States.

Workers were set to take to the streets in Seoul, Dublin, Casablanca and Panama City, part of strikes planned in as many as 80 cities, the New York Times reports.

“We’re here to get $15 and a union, we’re here to strike, we’re here to make some noise and we’re here to disrupt because that’s the only way to get their attention,” Taco Bell employee Chad Tall said on CNN. He and other workers were striking outside a McDonald’s in New York.

The most recent round of fast food wage strikes began more than a year ago, but they have failed to meet their goal of forcing McDonald’s and other companies to raise workers’ wages to at least $15 an hour. (The current federal minimum wage in the U.S. is $7.25.)

“Fast-food workers in many other parts of the world face the same corporate policies—low pay, no guaranteed hours and no benefits,” said Mary Kay Henry, the president of the Service Employees International Union.

The median pay for fast food workers is slightly higher than $9 an hour, coming out to $18,500 a year, CNN reports—which falls short of the Census Bureau’s poverty threshold of $23,000 for a family of four. 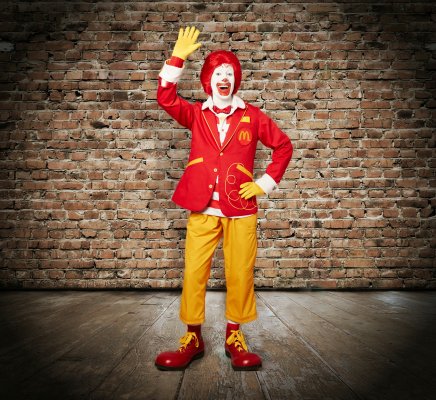 America's Most Terrifying Mascot Is Getting a Total Makeover
Next Up: Editor's Pick