Remains of the Day

Two 80-ft. (24 m) “tridents” from the World Trade Center’s facade rise through the glass-enclosed atrium of the museum’s entry pavilion, with its crisscrossing steel truss work. The stairway leads down to the mostly under­­ground museum
Floto + Warner for TIME
By Richard Lacayo

Only a portion of the new 9/11 memorial Museum, the entry pavilion, extends aboveground, but right away it says something about the mission of this museum. Don’t go expecting a serene, classical foyer. On the outside, the building is a network of diagonal bands of steel and glass. Inside, it leaves visible an irregular web of crisscrossing truss work. Though it has its decorative purposes, that jangling matrix signals from the start that this is a museum that must acknowledge a historic upheaval, a rupture in the fabric of time.

And with that it offers the first hint of how the museum, which opens to the public May 21, differs from the nearby 9/11 Memorial. With its reflecting pools and waterfalls, the memorial is designed to commemorate the dead and console the living. The museum does that in places too, beautifully sometimes, but it has a more complicated job–reopening the wound. The museum’s director, Alice M. Greenwald, knows something about institutions that must confront painful subjects. Before coming to the job in 2006, she spent nearly two decades at the U.S. Holocaust Memorial Museum in Washington. But even that museum was located far from the Nazi death camps where the atrocities took place. The 9/11 museum is different. It’s built on the scene of the crime.

Like every other project at Ground Zero, from the time it was first proposed about eight years ago, the National September 11 Memorial Museum–to use its official name–has weathered occasional turmoil. There was the fight over whether it should display photographs of the hijackers. The compromise is small head shots mounted below eye level. Then members of 17 families filed suit against the city of New York when they learned that unidentified remains of the dead–about 14,000 bits of bone and dried tissue fragments–would be placed in a repository in the museum building. The suit failed, and the remains were solemnly delivered earlier this month to a room at the museum, one closed to the public and hidden behind a large wall.

There’s also an ongoing controversy over a short film in one gallery that tries to explain the ideology of the attackers. An interfaith panel of clergy assembled by the museum says the film doesn’t do enough to make clear the distinction between al-Qaeda-inspired terrorism and the beliefs shared by the great majority of Muslims.

Then there’s the admission fee for most visitors–a hefty $24, though the museum will also be free for three hours every Tuesday after 5 p.m. To subsidize its roughly $700 million construction cost, the museum received $330 million in federal and New York State funds. The rest came from private donations; both the museum and memorial are owned and operated by a nonprofit foundation. But so far it has no commitment for government help to cover an estimated $65 million a year in operating costs.

The disputes will go on, but meanwhile the museum is finally here, and as many as 2.5 million people are expected to visit in its first year. The entry pavilion, which was designed by Snohetta, a firm headquartered in Oslo and New York City, is where they will pass through security, a ritual that is itself a legacy of 9/11. It’s also where they will see the first scorched remains from Ground Zero. Minoru Yamasaki, the architect of the Twin Towers, sat his very modern steel cartons on a palisade of pointed Gothic arches. Now a linked pair of those “tridents,” with their muscle memory of the cathedrals that inspired them, are planted in the glass atrium of the entry building. Standing 80 ft. (24 m) tall, they rise past the mezzanine level, which holds an auditorium and a private room for 9/11 families.

Everything beyond the entry pavilion, meaning the greater part of the museum and its 110,000 sq. ft. (10,200 sq m) of exhibition space, is the work of a New York City–based firm, Davis Brody Bond. From the entry, visitors will descend like Orpheus into the underworld, because almost all the museum is underground, directly beneath the twin pools of the 9/11 Memorial. Very directly: the belowground expression of the memorial’s sunken basins, nearly 70 ft. (21 m) deep, plunge through the museum’s ceiling, ending 14 ft. (4 m) above its lowest floor.

The architects have turned that space invasion into a poetic opportunity. They covered the giant intrusions in thin panels of silvery foamed aluminum, a material created by forcing gas into the metal at high pressure. Like the memorial pools, which occupy the original footprint of the towers, the evanescent shafts now become a symbolic remembrance of the Twin Towers, this time in almost weightless terms. At least until visitors enter the enclosed exhibition galleries directly below the shafts, at every turn they see the ghost of the lost towers.

There are also real remnants of the towers in this space. On the floor beneath the aluminum-clad volumes, along the perimeter each would form if it rested on the ground, are the remains of the steel box columns that supported the outer walls of the towers. When the last of the Ground Zero debris was cleared away, those columns were sawed off at ground level. Now they have the haunting character of ancient ruins.

In effect there are two museums here. The first is the concrete-walled monumental space that visitors descend into by way of a long ramp with a switchback path. A processional corridor with a gentle slope, that ramp subtly references the one that was used for years by recovery and construction workers, as well as the families of the dead, to enter the Ground Zero pit. Along that path, visitors pass through changing vistas of concrete walls and corridors and even catch glimpses of exposed Manhattan bedrock below. That vast introductory space all around them has a weight and solemnity commensurate with the tragedy it speaks to.

There aren’t many objects in this part of the museum. The few you see are mostly huge and semiabstract: a twisted length of steel mounted high on an otherwise bare wall like a warped crucifix; a mangled fire truck; an immense shredded cylinder that was part of the broadcasting antenna that topped the north tower.

Steven M. Davis, one of the museum’s architects, says his team was guided by four principles: “memory, authenticity, scale and emotion.” In that outer zone you sense those precepts in action. This is architecture reaching for the ambition of Daniel Libeskind’s profound Jewish Museum in Berlin, where in places the building itself, more than any exhibit it contains, is what conveys feeling and meaning. The 9/11 museum does that best in what’s called the Foundation Hall, a resounding space bordered along one side by an exposed portion of the slurry wall, the mighty barrier that held back the Hudson River after the towers came down, preventing a flood that would have inundated lower Manhattan. In the raw crescendo of that chamber, with its majestic battered bulwark, the museum can feel like the ancient Roman Forum. The Foundation Hall also holds what’s known as the Last Column, an upright 36-ft. (11 m) steel pier covered with inscriptions, mementos and missing posters. When it was removed from the pit on May 30, 2002, it marked the end of the nine-month Ground Zero cleanup.

Having reached the Foundation Hall, most visitors will move into the enclosed exhibition rooms, the second museum, beneath where the north tower stood. If the outer museum is stark and quiet, these spaces are where the noise of history takes over. They’re filled with videos, old newscasts and audio recollections and are crowded with items from the museum’s more than 10,000 artifacts, most still trailing their residue of grief. And where the outer museum has an almost timeless feel, in the first galleries, devoted to the day of the attack, time collapses into a single day. A wall-mounted timeline flows from room to room to mark crucial developments. Because the times are printed behind lenticular lenses, the minutes appear to evaporate as you walk by, moments we can no longer repair, an irretrievable past.

Later galleries step back to chart the rise of al-Qaeda and forward to the recovery process and the long legacy of 9/11. Below where the south tower stood is a memorial to the nearly 3,000 who died at Ground Zero, at the Pentagon, in the crash of Flight 93 in Pennsylvania and in the first attack on the Trade Center in 1993. Rank after rank of equal-size head shots cover all four walls. Tabletop touchscreen computers are available for visitors to call up information, photos and audio remembrances for each of the victims.

For many, that gallery will be the last they see before they return to the surface, to a view of the memorial and those consoling waterfalls. The completion of the museum is an important moment in the imperfect reclamation of Ground Zero, a place where years ago grief swept the table and which is slowly coming back to life. You could say that every visitor will now be a kind of recovery worker, returning the site to normality simply by being there, helping in a small way to take back that haunted space. 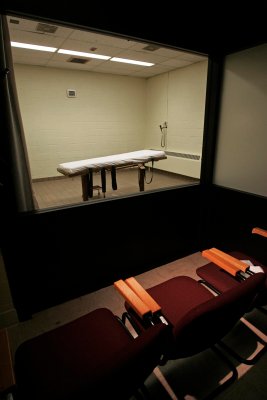