An anti-government protester blows her whistle during a rally outside the office of Election Commission in Bangkok May 15, 2014.
Chaiwat Subprasom—Reuters
By Charlie Campbell

Three people were killed and at least 21 injured in Bangkok early Thursday morning, as M79 grenade rounds and gunfire from a passing pickup truck tore through a group of demonstrators camped in the center of the sprawling Thai capital.

The violence came just hours after talks on new elections between Thailand’s interim Prime Minister and the Election Commission were postponed over security concerns, and later on Thursday around 100 demonstrators stormed a military compound to disrupt the rearranged gathering — blowing their trademark whistles and waving Thai flags.

At least 28 people have been killed and 800 wounded since the current strife kicked off in November.

Thailand’s political deadlock has intensified since Prime Minister Yingluck Shinawatra was ousted by the Constitutional Court last week on charges of nepotism. Her supporters, known colloquially as Red Shirts, want elections slated for July 20 to go ahead and are currently amassed outside Bangkok.

Parties backed by Yingluck’s powerful family have historically derived strong support from the populous northern and northeastern provinces, and any fresh ballot would likely add to their previous five consecutive election victories.

Knowing this, antigovernment protesters — mainly royalists and urban middle classes — want polls postponed until reforms can be instigated to permanently clip the wings of the Shinawatra clan.

A caretaker administration has been in office since parliament was dissolved in December, meaning that myriad infrastructure and development projects lie mothballed.

The crisis is now drawing greater attention from policymakers in Washington. Thailand was the first country President Barack Obama visited after his 2012 re-election, and though bilateral trade only notched some $37 billion or so in 2012, American investment in the kingdom is significant, totaling some $13 billion.

Just as important, Thailand is a major strategic defense partner for the U.S. in the region. “A lot of the work we’re doing with Thailand is not about bilateral issues per se, but how we work together to deal with problems, challenges and opportunities in the broader region,” State Department Asia specialist Scot Marciel told a meeting arranged by the Center for Strategic and International Studies in Washington on Tuesday. 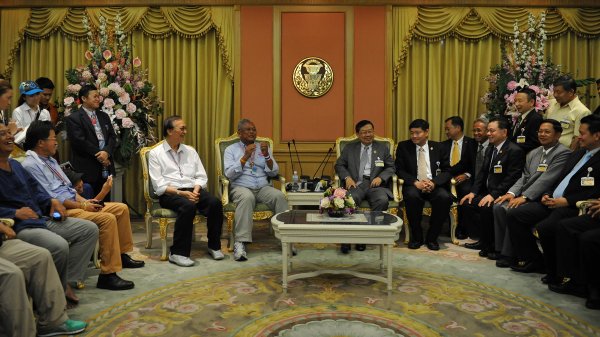 Thailand Looks to Its Senate to Solve a Deepening Political Crisis
Next Up: Editor's Pick