Donald Sterling Lashes Out at Obama in Latest Leaked Recording

Disgraced Los Angeles Clippers owner Donald Sterling says he’ll take his fight all the way to the Supreme Court before selling his stake in the team.

In a lengthy audio recording of a discussion between Sterling and the hip hop artist Maserati obtained by the Daily Mail, Sterling denies he’s a racist and slams his critics, including President Barack Obama, for, he says, failing to get “all the full facts first.”

“I think that was such bad judgment on his part to make a flippant comment from Malaysia,” Sterling said of the president. “He’s a good guy, and I like him, I just think everybody wants to get into the act, is that it?”

Sterling says he will not sell his stake in the Clippers, vowing to fight all the way to the Supreme Court if necessary. He also said he refuses to pay the $2.5 million fine levied on him by the NBA.

In segments of the 1.5 hour conversation, Sterling, whose wife said recently she believes he suffers from dementia, sounds confused. When discussing V. Stiviano — the woman who he is heard making racist remarks to in the recoding that led to his lifetime ban from the NBA — Sterling, who is Jewish, fumbles trying to remember the holocaust. “‘She said blacks are treated in California like where all the Jews were killed, you know what I mean? Where was that? The, um, you know.”

Elsewhere in the interview, Sterling claims to have received support in the Los Angeles black community. He also describes how he met Stiviano.

“I’m embarrassed that a man 80 years old would try to make it with a girl. But I tried,” he said. “This chick was something else, so I would say anything to her. She was an animal and to deal with her was even harder.” 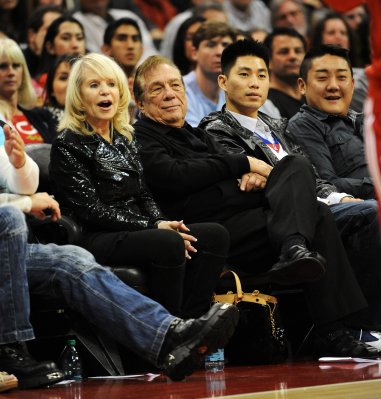 Shelly Sterling: Why Should I Lose My Team?
Next Up: Editor's Pick