Upfronts Watch: CBS Changes, Albeit By Staying the Same

CBS president and CEO Leslie Moonves came to the upfronts this year with what is arguably the CBS upfronts message every year: “There are some things that never change.” CBS, he says, is the network advertisers can rely on for “stability” and “experience.” It delivers big audiences (generally) for well-executed traditional TV shows. It’s the last network, as it likes to say, doing broadcasting in a fragmented media market.

Well, one little thing changed. In recent years, CBS has gotten used to winning the ratings competition. It was kind of their thing. The network didn’t do too badly this season either, falling only into second place in the advertising-sales demographic behind NBC, which was boosted by football and the Olympics. But CBS doesn’t like second place, and many of the hits it has are aging (Two and a Half Men, for instance, entering its final season). So it came to its upfront this year with one of the most deeply changed fall schedules it’s had in years.

But it’s worth noting that CBS’s changes are almost entirely about strategy and scheduling: in particular, it’s forgoing a two-hour comedy block on Mondays for the first time since the 1980s. Creatively, the changes involve bringing in new series that look absolutely, 100%, like CBS shows. As in having “CSI” or “NCIS” in the titles. Or involving heroes protecting you from psychos and terrorists. (If CBS has a brand identity, it’s raunchy comedy and fear of a dangerous world. Plus sports.) Arguably the most radical creative decision CBS made–not counting hiring Stephen Colbert a few weeks ago–was what it didn’t pick up: the How I Met Your Mother spinoff How I Met Your Dad.

If CBS is a restaurant, in other words, they’re rearranging the dining room, not changing the menu. So its new shows don’t much clash with its old shows. There are brand extensions NCIS: New Orleans and (later in the season) CSI: Cyber. There’s bleak crime drama Stalker, being paired with bleak crime drama Criminal Minds for what appears like a Dead/Terrified Woman of the Week superblock (in the trailer, a woman gets burned alive). There’s Madam Secretary, with Tea Leoni as secretary of state in a drama CBS is comparing with The Good Wife. (An encouraging sign, if not for this show, than for the fact that CBS gave The Good Wife more love at this upfront than any I recall, including an opening skit that had Alan Cumming singing “Willkommen” from Cabaret as Eli Gold.) Scorpion, a cyber-crime drama about elite hackers (between that and the new CSI, get ready for some typing, America!). And The McCarthys, about a gay son in a sports-crazy Boston family.

Neither of the most intriguing trailers CBS showed Wednesday were for the fall. Extant, the summer sci-fi drama starring Halle Berry, has elements of Gravity (a solo mission in space), AI (a robot child!), and Contact (possible alien communications), plus a mystery pregnancy. And Battle Creek, the first post-Breaking Bad series from Vince Gilligan, suggests it will likewise have a mix of suspense and quirky humor, though it looks to be more procedural, less operatic.

Really, the big moves CBS is making don’t involve comedy and drama at all: they’re in sports, where it’s adding Thursday-night football, and late night, where Stephen Colbert is replacing David Letterman. The upfront brought Letterman out on stage for one last tribute, after which he thanked Moonves for two decades of support, then closed with a joke that he attributed to Norm MacDonald:

A moth walks into a podiatrist. His life is terrible. His older son was kicked out of college. His middle son might be going to jail. His younger daughter may be pregnant. He doesn’t get along with his wife. That’s awful, the doctor says. You don’t need a podiatrist, you need a psychiatrist. Why’d you come here? “Well,” Letterman concluded for the moth, “the light was on.”

Letterman got a big round of applause. He’ll end two decades of CBS history when he leaves, but the message of CBS’s presentation was that, however much was changing, it aimed to deliver advertisers more of what they expect from the Consistency Broadcasting System. The upfronts, after all, are all about keeping the lights on. 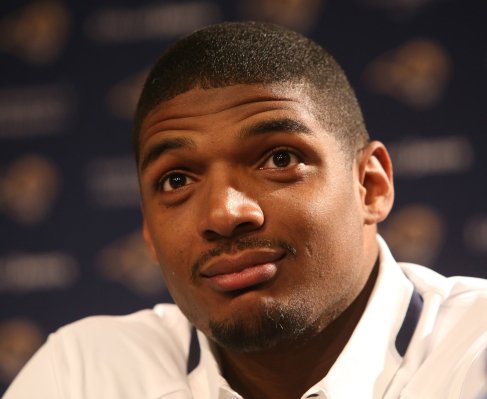